Every major event of the past few years seems to have been reported as being ‘the first social media X’. Olympics, World Cup, election… the list goes on. And it’s true that today’s birth of a royal baby was the first where social led the news agenda.

(Congratulations, by the way, to Kate and William).

However, a royal event like this birth provides a chance to test just how democratised the new media landscape is. The question is:

Which was bigger on Twitter today – official source or irreverent parody?

Two big Twitter accounts, one news story, lots time fill with to tweeting. On this most auspicious of days (or not, depending on your politics), it’s time for the @ClarenceHouse versus @Queen_UK grudge match.

The official Clarence House account was opened in 2010 to announce the engagement of William and Kate, and was somewhat of a trailblazer, being the first Twitter feed for the royal family.

Loved and hated in almost equal measure, parody account @Queen_UK is home to the ‘Gin o’clock’ catchphrase and offers a wry look at current affairs. Whoever runs the account is making hay by linking with Bombay Sapphire gin and releasing a book.

Who announced that Kate was in labour first? Who did it best?

The official source won, but not by much: the Clarence House tweet came at 7:37am, and was retweeted 6,662 times. Queen_UK followed just seven minutes later, gaining 952 RTs.

That said, neither was actually first with the news. Ikon Pictures photographer Jesal Parshotam was the first to spot the Duchess slipping into St Mary’s Hospital at 5:55am.

Perhaps it was a case of them double-triple checking the news (who’d want to get it wrong?), but surprisingly, @ClarenceHouse was scooped on the announcement of the birth of a baby boy.

They tweeted: ‘Her Royal Highness The Duchess of Cambridge was safely delivered of a son at 4.24pm’ at 8:35pm. @Queen_UK got the news out at 8:30pm with a simple: ‘The Royal Baby has arrived. It is a boy. #RoyalBaby‘. It’s interesting that for once, the parody played it straight – fulfilling its secondary role as a ‘proper’ news source.

Again, though, Twitter users delighted in sharing the major news with the authoritative source: 14,328 RTs to Clarence House, 3,039 to Queen_UK.

Based on the number of retweets received on the day, @Queen_UK trounced the competition here, 53,799 to 37,173. But then it did send twice as many tweets (27 to 13), and send one promoted tweet, so you could say that on aggregate, engagement for each account was about even.

I used Tweetreach to dig a little deeper, and although the stats aren’t exactly perfect (the incredible focus and activity on each account meant the reports I received covered just a few hours’ worth of data), they again prove that the official source won.

Over the three hours up to 11pm @ClarenceHouse’s tweets reached 7.2 million Twitter users, while over a marginally longer timeframe @Queen_UK reached ‘just’ 2.1 million.

Account exposure was a closer fight – Clarence’s 9.7 million figure only a little ahead of the 8.3 million figure of the gin-loving lady. So a tighter pool of people follow and retweet Clarence House, while the Queen_UK account is more viral and engaged with by a wider spread of people.

As well as getting the facts out clearly and effectively, @ClarenceHouse posted a cute #WelcomeToTheWorld Storify of other new 22 July arrivals, offered followers the chance to sign a (slightly naff?) Google+ congratulations card, retweeted the real Queen’s @BritishMonarchy account and linked to a message of best wishes from Prince Charles.

But @Queen_UK was more fun. Yes, some of the tweets (George Osborne is a moron, Ed Milliband believes Kate is joining his party) had the waft of shooting fish in a barrel, but the wonderful ‘Succession secured. Gin. Bed.‘ will surely have raised more than a few smiles (and glasses of Bombay Sapphire). Could have done without the Coral ads though.

I guess that proves something about the nature of Twitter, though: official accounts, properly managed, are great for confirming and spreading big news, even when they’re not first. Despite the bottom-up, raw, guerilla-like character of Twitter, people like the comfort of a recognised authority, and the highly manageable nature of this particular story suits a source like Clarence House perfectly.

But it was nice to have @Queen_UK fill the waiting time.

You’ve probably heard of Pinterest before, but maybe you’ve not tried it yet – essentially, it’s a tool for collecting, organising and curating images of things you like – like a digital pin board.

Although Pinterest has been available in the UK for quite a while, last month marked its official launch here, and I was really pleased to be invited to the Pin It Forward UK event. The Pin It Forward campaign is all about Pinterest-loving bloggers spreading the word about the platform, following a similar grassroots effort in the US. I really like it so I’m happy to help!

Pinterest is a great place to see cool images and products, but for me, the killer feature is the way that all images link back to their original source – so if you spot something you like, it’s really easy to find out more about it.

You can ‘pin’ images from anywhere online – personally I use the Shareaholic Chrome extension, but you can also do it from within Pinterest with a URL, via their uploader tool, or you can ‘repin’ other users’ images.

My biggest board, Cars, has a slight Toyota and Lexus focus thanks to my day job, but I also collect images on other boards including Books, Art and Places.

I’m really enjoying using Pinterest, and even though I’m far from the most prolific pinner, I love how engaging and simple it is. I’ve already found a load of interesting people, images and boards – including some awesome David Bowie images. 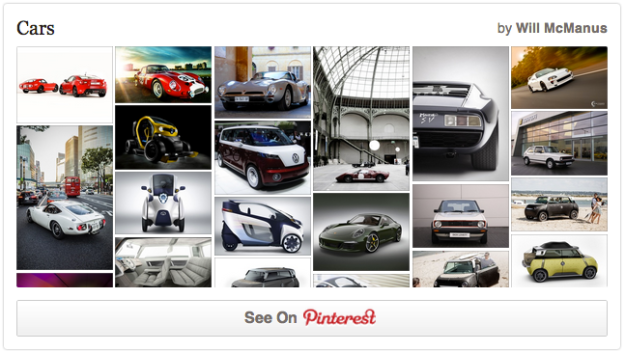 If you don’t have an account yet, you can start pinning by using this registration link.

Part of the Pin It Forward campaign is about sharing the love, so it’s my job to introduce you to fashion writer and photographer Jonathan Daniel Pryce. He’s collected some superb images, and is well worth a follow – even if his 100 Beards board makes me feel a failure in the facial hair stakes!

A recent video we made for the Toyota Aygo – it was definitely one of the more interesting projects I’ve worked on so far, but a lot of fun.

It was great to make sure the bananas went to good causes too (not sure about the presenter, though).

Read the full story on the Toyota Blog.

Emily Lloyd has really hit the nail on the head with this Slideshare presentation. Working in social media often turns up lots of instances of brands trying too hard to be involved with major events. While it’s great to be part of a conversation, often it’s best to just keep quiet, be respectful and steer clear.

I really enjoyed working on this story. Jason Bowes, a 20-year-old guy from Middlesbrough has set up Coffee2Go, his own business serving coffees from the back of his Toyota iQ.

He worked with his dad to modify the car and create a custom frame that supports the Fracino coffee machine, plus the water and gas tanks needed to serve coffee on the move. The whole business – cups, condiments, signage and all – fits into the car. It’s amazing!

The images and video were shot for Toyota GB by Page One Photography, who I’d definitely recommend.

Here’s a great example of how we’re using social media at Toyota GB.

It happened yesterday – we took a tweet from the friend of a potential GT86 buyer, showed off the selling points of the car by directing her to our reviews round-up page on the Toyota UK Blog and worked with a dealer near to her to turn it into a convenient test drive.

Read the full story on my Storify.

So this just popped up on my Facebook feed:

Terms of use for a hashtag? Surely not?! I clicked on it and saw this:

This strikes me as all kinds of wrong. The way I read this, you use #legendends on Twitter, and Warner Brothers then essentially owns your tweet, and can use it however they like for advertising, marketing or merchandising purposes, without crediting you in any way.

In fact, as far as I can see, this post is hidden from the main timeline on the ‘The Dark Knight Rises – UK’ FB page. This smacks of bringing these terms in on the quiet. Most people wouldn’t see this unless it came up on their News Feed and they were (like I was), puzzled or curious enough to click the link.

You can’t make someone enter into a contract they know nothing about.

How on earth does Warner Brothers think this is OK? Let’s imagine I put up some terms on this blog about the use of a popular hashtag, say #ff, #winning or #justsayin.

Do I get to own all the tweets using that hashtag and then use them wherever and however I like just because I say I can?

I do appreciate that Warner Brothers has made and paid for this film, and has to promote it, and that social media is key to its strategy – in fact, I’m really excited to see it on Friday night and I don’t begrudge them hyping it up in the final days before its release.

But I’m amazed WB thinks it’s OK to take people’s words, say they own those words and use them for their own commercial purposes without attribution – potentially, without the authors of those words knowing anything about it.

I thought that social media was all about taking part, being fair and open and ethical. I thought that ‘owning the conversation’ was just a phrase. For Warner Brothers, it looks like it’s part of the business plan.

This video, which I wrote about on the Toyota Blog, is a great example of social marketing. So cool!

I recently covered the launch of the new Toyota Prius+ for Toyota’s social media spaces.

Here’s my blog about the event: Toyota Prius+ launch – behind the scenes. 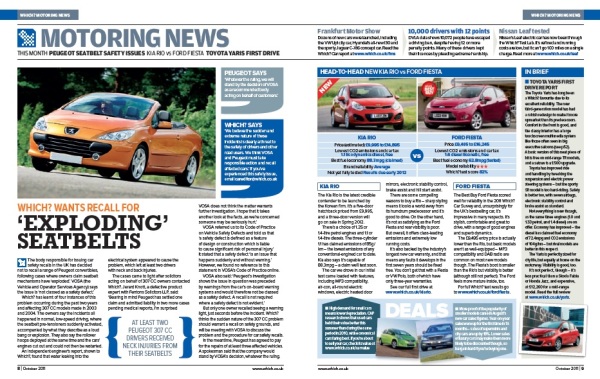 While at Which? I produced the Motoring News section for the monthly Which? magazine. Here’s a sample – click on the image to view in PDF format.